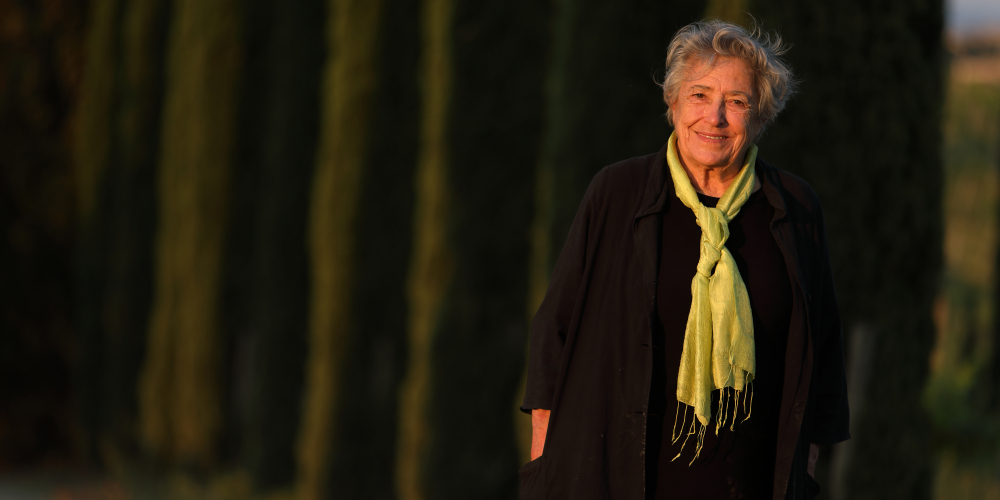 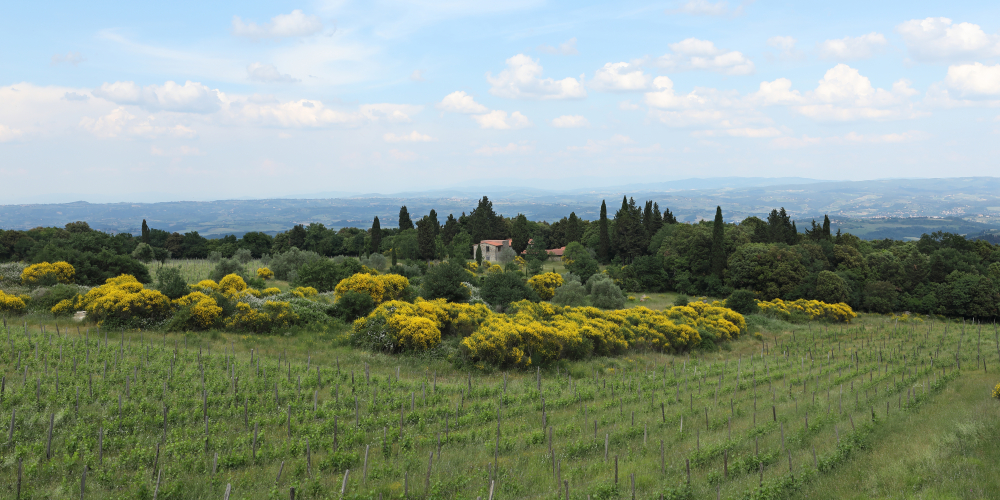 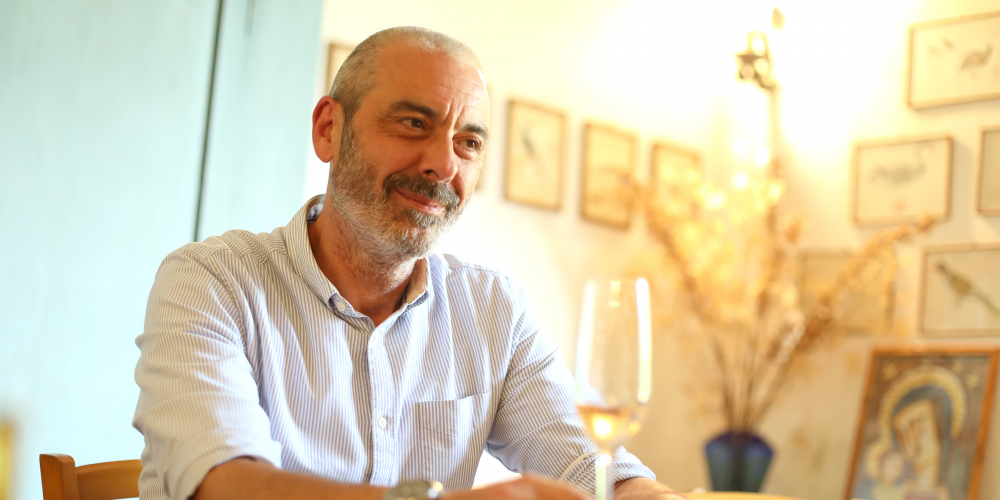 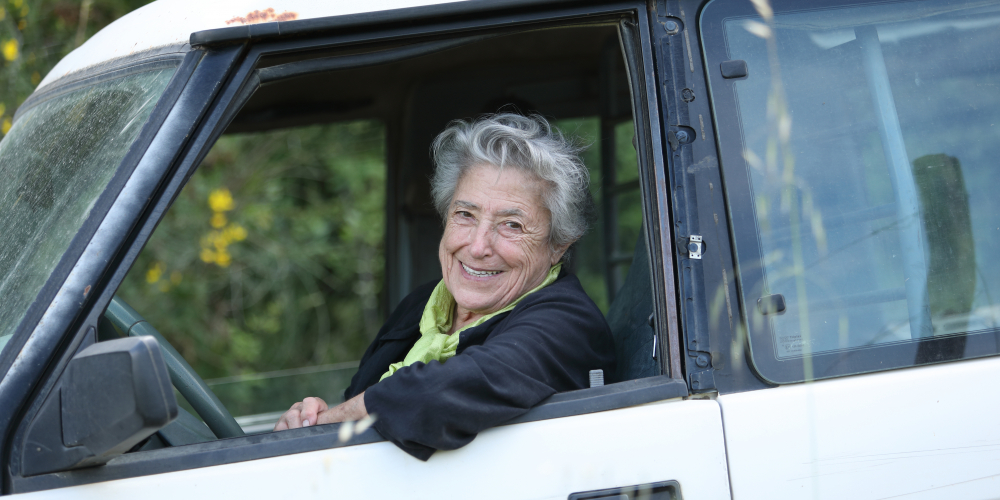 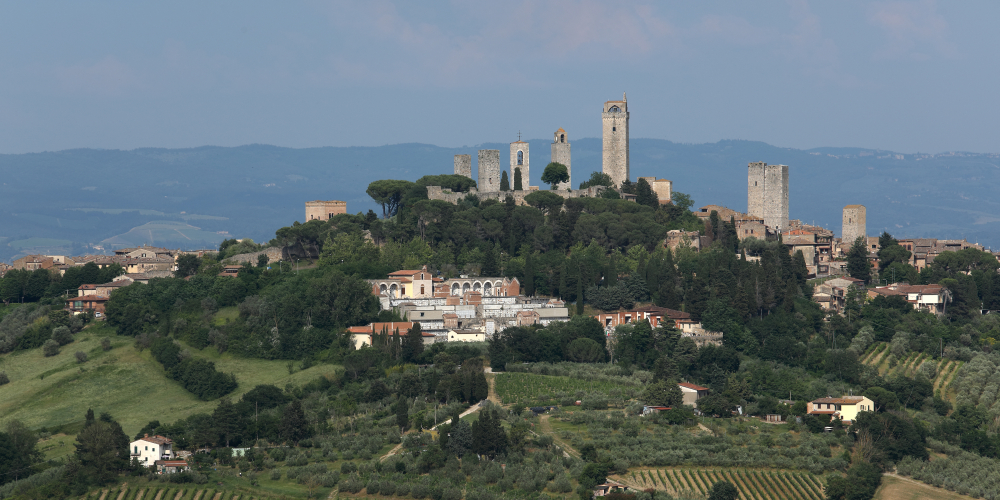 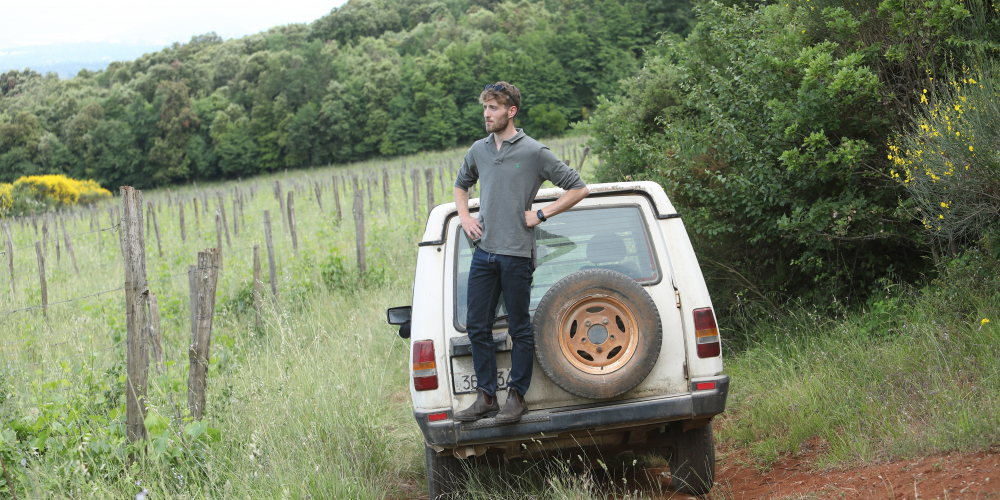 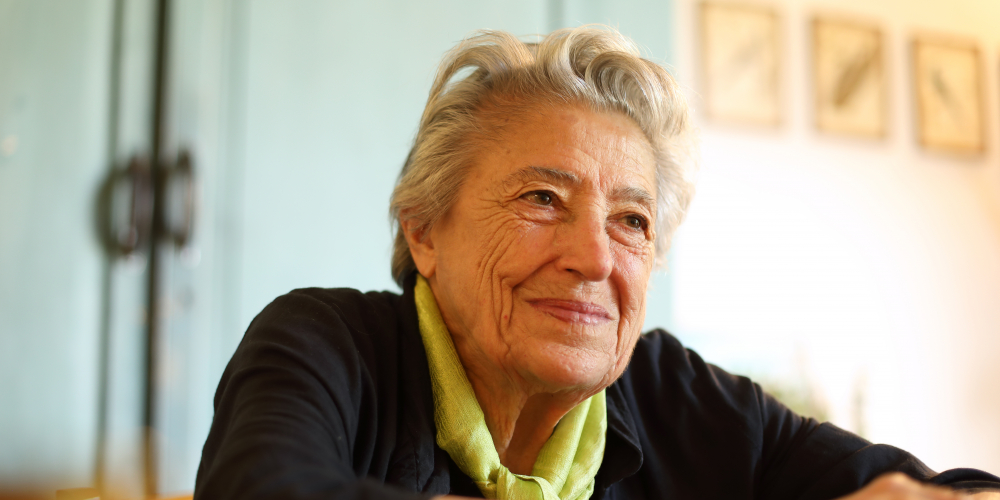 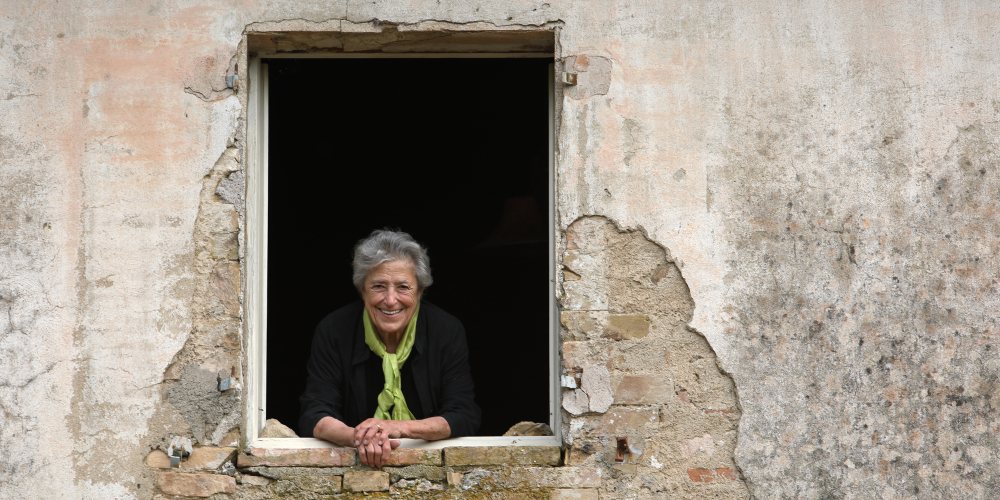 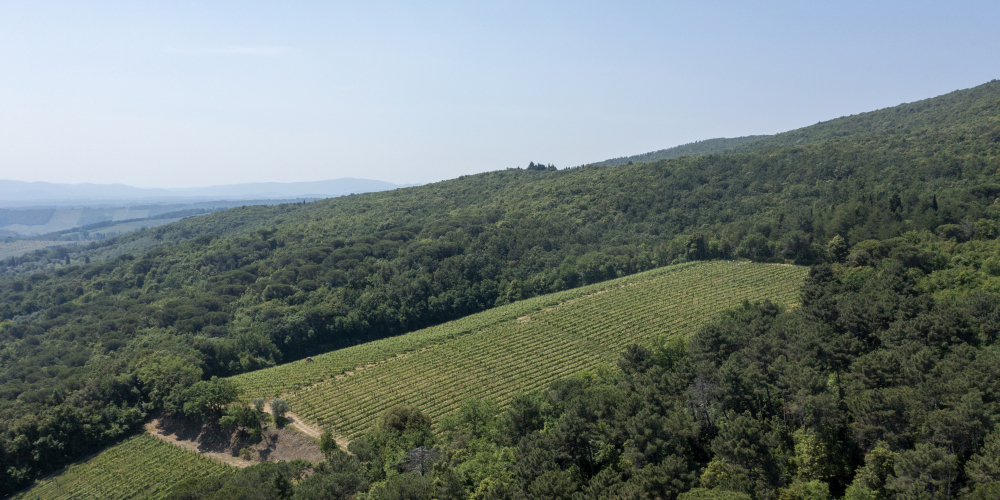 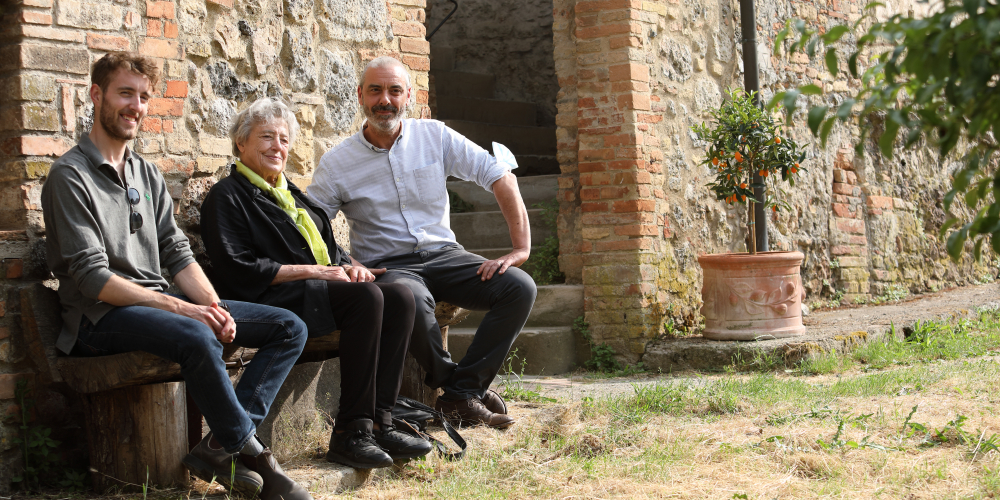 Montenidoli is literally and figuratively a mountain above the appellation of San Gimignano. It is a large estate of roughly 200 hectares, though just 24 hectares under vine, on a mountainside overlooking the picturesque town of San Gimignano with Chianti Classico in the distance. Elisabetta Fagiuoli is pivotal figure when talking about the last 50 years of Tuscan winemaking. In fact, 2020 marked her 50th vintage produced! Many people think of Vernaccia di San Gimignano as a simple white wine meant to be consumed fresh and young, though the whites of Montenidoli prove that does not have to be the case. While the wines show well on release, they greatly improve both with extended aeration in the glass or decanter as well as with bottle age.

Elisabetta Fagiuoli travelled a great deal in her youth, from Europe to southeast Asia and Japan. It was not until 1965 that she came to Tuscany and fell in love with the Montenidoli estate which she was able to purchase with the help of some money from her grandmother. When she found the estate, both the vineyards and olive groves were in total disrepair. As in many parts of Tuscany, many of the peasants who had previously lived on and worked the land had moved to the cities to follow jobs. This left many of the historic estates of Tuscany abandoned and in disrepair. Luckily, there were still some old vines in good health. From then on, she began working towards restoring the property to its former glory.

The vineyards at Montenidoli are relatively high, between 400 and 700 meters, with soils and microclimate that are actually suited to both white and red grapes. The vineyards for her Sangiovese are planted at the highest elevations, with iron-rich soils and a base of limestone. Interestingly, in many of the vineyards, thare are marine fossils strewn throughout, much like you find in Chablis, as well as huge blocks of white limestone that have been excavated from the vineyards. In fact, it is this marine sediment limestone that ultimately led her to realize the potential of the property for white wine, as in the beginning, Montenidoli produced only red.

Elisabetta was actually drawn to the estate initially for its great potential for red wine, in particular, Sangiovese. In fact, from 1971 when she made her first commercial wine, and up until 1984, she did not produce any white wine at all! Her reds earned early fame when Luigi Veronelli, legendary wine collector turned critic chose to write about her 1971. Throughout her career she was also able to get advice from some of the titans of Tuscan winemaking including Giacomo Tachis (of Sassicaia fame) and Giulio Gambelli (of Montevertine fame).

Elisabetta Fagiuoli is proud of the fact that her land has never seen the use of pesticides. She has farmed organically as long as she has had the property and can attest that previous to her it had been farmed organically. Given that her property is isolated on a mountainside, she has the added benefit of not having any close neighbors, relieving her of any concern about systemic, non-organic treatments being used in adjacent vineyards. In fact, “Montenidoli” means “mountain of the bird nests” which is a perfect name for the oasis of biodiversity that is her property. The soil at Montenidoli was impacted greatly by the Ligurian Sea which extended into much of what is now Tuscany millions of years ago. You can still often find large prehistoric oyster fossils in the soil, many of which are on display in the winery. On the higher elevation parcels of their property, you find a deep, red, mineral-rich soil where they source their top reds, the Triassico and the Sono Montenidoli.

Elisabetta’s winemaking has not changed much over the years. Regarding he debut 1971 vintage she said, “I made the wine in the simplest way. I had nothing.” Elisabetta describes Vernaccia as “a white grape with the body of a red”. Partly because of this, all her whites see some skin contact during fermentation.

She also was influenced at a young age by a French uncle who used to visit her family and would always bring White Burgundy with him. This left an early imprint on her about the art of making fine white wine.  Her Vernaccia “Carato” is inspired by those memories and is fermented and aged in new and used barriques, creating somewhat akin to a fine White Burgundy. Her most known whites, however, the Vernaccio di San Gimignano “Tradizionale” and “Fiore” bottlings are vinified in stainless steel with skin contact of course. The Fiore is made from free-run juice and sees extended time aging on the lees, usually for one year. Both wines see extended time in the bottle for release as well. The Fiore is incredibly nuanced and textured and showcases the age-worthiness and complexity of her wines.  In addition to these whites, Elisabetta makes a fantastic rosato made from Canaiolo, a grape which, she says, has the power of a red wine and the finesse and cut of a white wine, and because of that it makes the perfect rosato…for any season!

Her Chianti Colli Senesi Il Garullo is a special Chianti, based on the historic Ricasoli Chianti recipe from the 1700’s. It is a co-ferment in cement of Sangiovese, Colorino and Canaiolo along with the white grapes Trebbiano Gentile and Malvasia Bianca. It then ages further time in glass-lined cement followed by time in the bottle. It is a bright, alluring red wine that displays high-toned fruit and a beautiful dance-on-the-palate texture. Her top bottlings of the Triassico and Sono Montenidoli display both power and finesse, and showcase the unique mineral rich soil of the higher parts of her property.

Along with her long time partner, Sergio Muratori, they have often hosted troubled children for stays at the property. Since Sergio’s passing, she has started a foundation “Sergio the Patriarch” which will raise money to turn part of the property into a retreat to bring young and old people from different perspectives, cultures and viewpoints together to share ideas and to commune with the earth.

We are proud to include this special winery in our portfolio. It is a unique and iconic Italian producer whose wines clearly transcend the humble appellation from which they come.