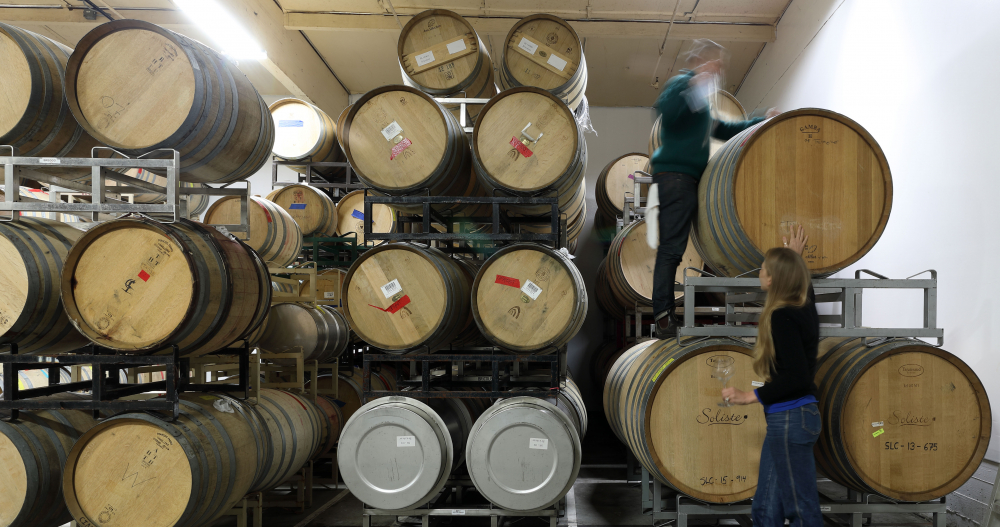 Trail Marker Wine Company is one of the most exciting discoveries we’ve come across from California in a long time.  This tiny gem of a winery focuses on Chardonnay and Pinot Noir from the Santa Cruz Mountains and Mendocino Ridge made in a very classic, old world way.  The people behind Trail Marker are husband and wife team, Drew Huffine and Emily Virgil.

Drew came into wine while working in wine retail in Los Angeles to supplement his salary as a Junior College English professor.  This "side job" eventually led him to work a harvest with winemaker Kent Humphrey (Eric Kent Wines), and ultimately Drew went on to work stints at Copain, DuMOL, Kosta Brown and Tuck Beckstoffer.  Drew is currently the winemaker for LIOCO Wines in Sonoma.

Emily grew up in LA, but ventured to New York to study fashion at FIT.  She later enrolled in a special two year exchange program in Italy with FIT, where she fell hard for Italian wine and food. After graduating, she returned to California to work in the fashion world as a costume deligner.  She met Drew through a mutual friend and quickly became re-entrenched in the world of wine.  Ultimately, the two of them made their way to the Bay Area to pursue their passion in wine. Emily also works for LIOCO as a Marketing and Special Event Coordinator.

Trail Marker was born in 2012 when the couple bought 1 ton of Chardonnay from the remote Manchester Ridge vineyard located at high elevation up in the Mendocino Ridge AVA. Drew had worked previously with ths site while making wine with Tuck Beckstoffer. Drew said one day he was out sampling the vineyard just before harvest and the fruit was at 21 brix and tasted just perfect! He tried to convince Beckstoffer to pick earlier than his usual big, ripe style, but to no avail. So, he decided then he would have to make the Chardonnay he really wanted himself!

In 2013, the couple met the so-called Grape Whisperer, Prudy Foxx, who is best known as a back-country shephard for some of the Santa Cruz Mountain's best and tiniest sites. They were given a serious interview before she agreed to help them find grapes. Fortunately, they passed the test, and Prudy introduced them to the Saveria Vineyard for Pinot Noir and Legan Vineyard for Chardonnay. After making the first wines from these sites, it became clear that the Santa Cruz Mountains was to become the main heart and soul of the Trail Marker project while continuing with the original Manchester Ridge site as well.

Unfortunately, the Legan Vineyard was later budded over, and they lost the fruit. It has now been replaced by another vineyard called Chapel. It is not quite as old as Legan was, but the results are equally promising.

Drew acknowledges that, of all his experiences, his stint with Wells Guthrie at Copain really helped shape his ideas and vision about the possibilities of making wine in California. "Working at Kosta-Browne and Tuck Beckstoffer was hugely valuable, but it taught me as much about what not to do, as what to do!", says Huffine. Not surprisingly, the goal of Trail Marker is to work with cooler, coastal sites where flavor development occurs at lower sugars, and the resulting wines are more about finesse and delineation than about brawn. The cellar techniques carry this philosophy forward with "hands-off" winemaking, including fermentations with indigenous yeasts, minimal handling in the cellar, and little or no new oak.

We believe the future of California is in the hands of talented winemakers like Drew and Emily who are ferreting out some of the most exciting and unique vineyards and vinifying them in a way that respects and fully exploits these wonderful underlying terroirs. The spirit of the name "Trail Marker" reflects this search for these special places where man and nature meet in a time and place that creates the essence of the vintage and vineyard in each bottle produced.